After having many requests from people (mainly MS3 users) for a board with up to 8 EGT circuits, I have designed a new version of the IOx that will be targeted at those users. It will not replace the current version but will be a new addition that will also be compatible with the logger board and the SLC OEM carrier board. This will give a single board solution to those users which is almost ready to use with the only things needed being cutting the case endplates for the connectors and external wiring. And I may offer pre-cut endplates at some point if the demand is there. 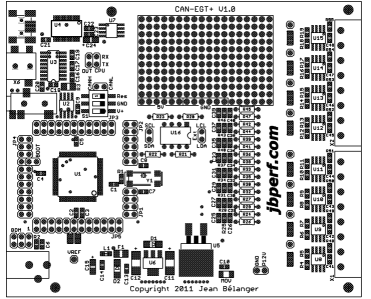 (click on the picture to get a larger version)

As you can see the CPU is in the same position as the IOx board with the headers around it which has the exact same pinout. There are 8 thermocouple amplifier circuits at the right, with the accompanying ADC conditioner circuits closer to the middle of the board, which will use the same plug in screw terminals as the ones on this board:

For those requiring less than 8 EGT circuits, the unused circuits will be unpopulated but the ADC conditioner connected to it will be populated and will be available for any device giving a compatible analog signal. That will also leave a connector position free to be used for other purposes if desired. The solder pads for these are located besides the thermocouple amplifier circuits.

On the left of the board, you will see the other connectors and circuits. At the bottom, there is the power jack which uses a barrel connector compatible with wall warts which will make it easy to plug the board on the bench or in the car. Above the CPU and headers is the jack for the CAN bus. This is a 3.5mm jack that is compatible with the USB-CAN adapter plug. There is also a 2-pin header for other types of connections. On the right of the circuit, you'll see a 3-position DIP switch which will be used to enable/disable the CAN terminating resistor when using multiple CAN devices and allow to connect or disconnect the power supply to a external CAN device such as the USB-CAN adapter (this powers the CAN transceiver to completely isolate the USB and laptop from the CAN bus).

The circuit above that is the RS-232 serial connection which uses a 2.5mm stereo jack that is compatible with the LC-1 cable plug. That will make connecting an Innovate chain as simple as connecting another Innovate product. But it can also be used for other compatible serial devices. And at the top is the USB port which is based on the FTDI chip and is isolated from the rest of the board (same as on the logger board). This port can be used to communicate with the CAN-EGT+ CPU from the PC for configuration and logging or as a passthrough to communicate with whatever device is connected to the RS-232 port.

There is also a place for an I2C bus extender (P82B715) which is located in the middle of the board between the CPU and ADC conditioners. This will be left unpopulated and is for a through hole chip so can easily be added by the user. It will allow someone to take the I2C bus lines and bring them outside the box to another box with up to 20 meters of wire length (depending on certain criteria). Another bus extender chip will be needed in the remote box but that should allow full use of the bus once the code is done to support additional devices (such as infrared temperature detectors) or for an external SLC OEM box using the current code.

And there is a large proto area to add circuits to use the available I/O ports.

Finally, this board will fit the same enclosure as the IOx but if a logger board is to be added, it will require the use of the taller case due to the height of the connectors. There is also the option of using the board as a part of a custom setup and this should be made easier through the use of the four mounting holes. This means the board does not need to be inserted in a slot but can be located anywhere.

I should have the first boards in a few weeks but it will be in very limited numbers. So if you are interested let me know.

Sounds like a really good idea for a board.

That looks like just perfect for the next car.
Yes, I'll be putting a hand up for one.
Top

Jean,
Is this the board you were referring to in your response to my inquiry below? If so, when will it be available an what will the cost be? Sounds like just what I need.

That board is what you need for an EGT setup but it doesn't have a place for the GPS module. You could still use the serial port with an external GPS though (assuming you can get a GPS with an RS232 port).

And I should have more information soon concerning availability and price.

Has this moved forward? I need a 4ch board.

Are the CHT k-type thermocouples? If so, you can have 4 channels configured for 0-500C instead of the EGT 0-1250C range.

Didn't check the "Notify me" box when I posted...

So how do I go about getting one of these and what is the cost?

I need one for a SBFord 302 project with MS3/MS3x. Can you please get me the info please!
Top

Would like to use this EGT+ box as an addon to my MS3/X to tune full sequential an aircooled (maybe turboed) VW engine. Will use a crank and a cam (dizzy) trigger just developed from a german company on a Type4 VW engine with original Type4 cooling to use the full sequential path of MS.

Having a few questions:
- The EGT+ operates out of the box with the MS3/ MS3x? No compilation of the source code to get CAN communication working?
- Read somewhere that i can use the EGT+ to measure 4 channel EGT and 4 channel CHT (up to 500 deg C)
- is there any recommendation regarding temp sensors? Or are sensors available as a kit from you?
- How to get EGT+ working with TS (gauges)? Is there any editing of the ini file necessary?

Can you send me some more information and pricing (shipping to europe)?
MS V3.00 DIY, MS3, MS3X, JimStim & StimX
Top

I'll PM you the pricing information. However, the boards are in short supply at this time and it could take a few weeks before I have more.

This has to be done in hardware because they need different components.

However, you can use CHT sensors with the EGT circuit. It's just that you will only use a small part of the range. That way you can change sensors around without having to worry about which circuit to use. But you do lose a small amount of precision.

Received my CAN-EGT+ board a while ago and finally had some time today to make the end plates. I decided to not use the plastic trim bezels so that I could have a completely flat bottom. I still need to buy the power and CAN jacks before I can play around with the unit. Is there a guide on how to setup TunerStudio? 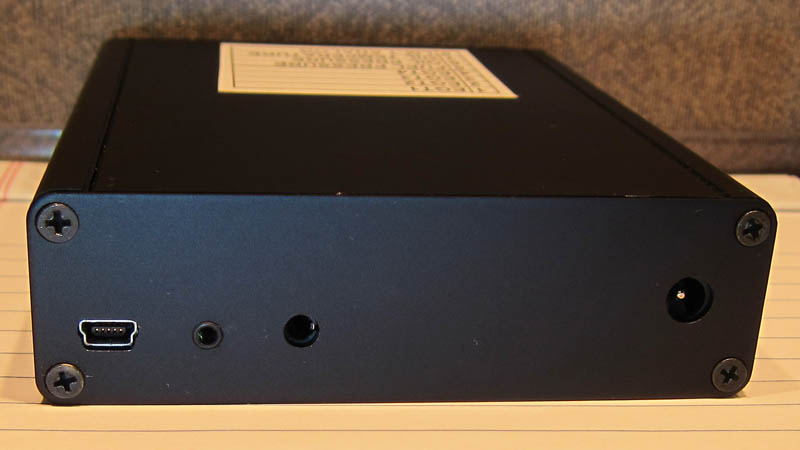 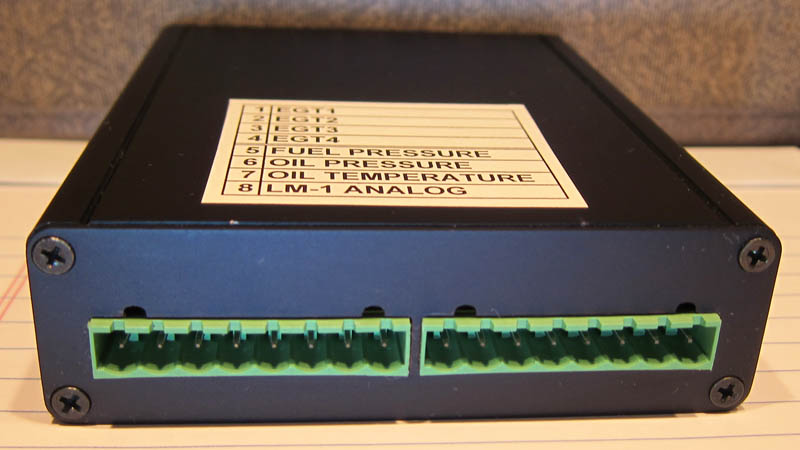 Nice job! And it does look good with the black case and no bezel.

As for the TunerStudio setup, what exactly do you need? The default configuration has the ADC circuits enabled so it should just be a question of connecting the CAN bus to your MS3 and configuring it to read the CAN data.

Also, I just made some measurements and you should be able to power the board through the CAN connector. The board in its basic configuration uses less than 50mA. So if the sensors you add don't use more than 50mA, you won't go over the DIP switch rating.

Jean,
Do you have the part number of those green plugs and sockets on these boards?
Top

Mhm wrote:Jean,
Do you have the part number of those green plugs and sockets on these boards?

Are any of these still available?
Top
Post Reply
68 posts