What I would be worried about would be oscillations. This is an open loop setup so there is nothing in it to dampen the oscillations : it would have to be done through careful choice of the duty cycle values in the table, the lag factor and possibly some mechanical means. But it's also possible that it wouldn't be much of an issue.

The MS3 Alpha codes already support this. Pressure sensor in as a generic sendor calibrated in kpa, and then set whatever output you want as the fuel pump drive, what frequency, and is also closed loop. It runs my Ford FPDM like the factory ECU would
Top

Jean, My MTX-L works with MS3 1.4 Alpha1, but I have noticed the AFR in TS is .1 richer than what is shown on tinyIOx. Is there an offset somewhere I am missing? Running tinyIOx 0.1.0 and the aforementioned MS3 1.4 Alpha1 Firmware
Top

Make sure that your AFR lag factor is set to 100 on the MS3.

good afternoon. sorry for the inconvenience but I'm new to using the megasquirt.
I have a ms3 + ms3x and want to use the module diyautotune CAN-EGT 8 + 2 channel thermocouple
interface modules AEM's 4-Channel Wideband UEGO Controller.
and I wonder if this module TinyIOx is my solution?

this is for a ford mustang drag 5.0L V8 HO
I want to do and I fully sequential individual details per cylinder.
Thanks I hope you can help me
Top

That could work but that may not be the most cost efficient way of doing this. It all depends on how much you're ready to so in terms of assembling your own circuits. Also, I'm not sure what you mean by the 2-channel thermocouple module.

If you don't have a problem with some DIY soldering, the IOx (I/O Extender) with an EGT board would give you all you need in a single box. That would replace the CAN-EGT and the TinyIOx. You would have 8 analog inputs on the IOx (for the 8 wideband channels) and the 8 thermocouple channels on the second board. The pictures below give an idea of what that would look like with a fixed or plug in connector for the EGT probes.

You would need to assemble the ADC circuits on the IOx and solder the headers to connect the 2 boards. These are the (unpopulated) circuits at the bottom of the picture below. 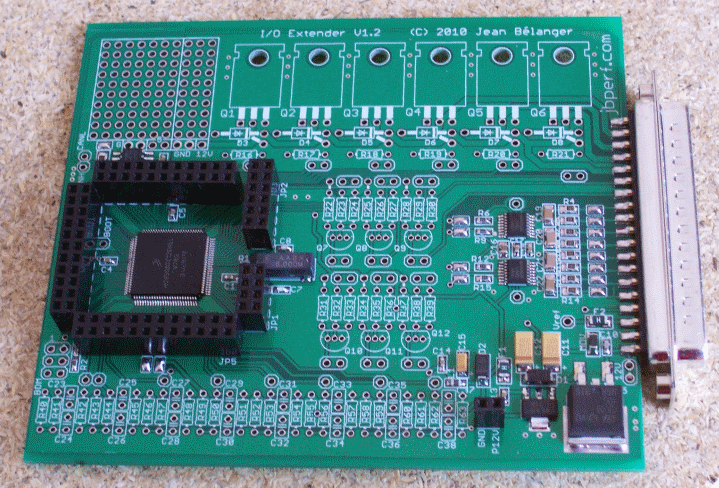 I would add that you might want to consider the Spartan 2 instead of the AEM unit. You would need 8 of them but they would not take more space and would likely be less expensive.

Would it support the plx daisy chain?
Top

Would it support plx devices via can?
Top

Do you have any information on the CAN protocol used? Without it I can't do anything.

I don't know what to look for.

I don't see anything that mentions what the physical connection is nor is there any information on the protocol. And if I remember correctly, I had an old document that did mention 3.3V serial connection which means it can't be connected directly to the TinyIOx.

Okay. That's a pity. Will just connect it the old fashioned way.
Top

Has anyone had a problem with settings stored in the LC1 getting corrupted?
A couple of times now the lambda multiplier setting in the LC1 has been set to some high random value.

I asked Innovate about it, they think its a serial connection noise issue.

Im asking here as i want to make sure this isnt some kind of TinyIOx interface bug, before i start replacing cables and connectors.

The TinyIOx is not sending any data on the serial port. So I have a hard time seeing how it could be the cause of the corruption.

Please excuse my ignorance here, I've done a fair bit of reading, and still cant find what im after.

Is the latest board shipped with the V1 firmware? (got mine Jan 2015) Or do i need to update it?

Also is there any reason why the board would work for about 15mins and then go offline?

(Done this three times now and takes me ages to get it online again) I've got it on a test bench with only Power and CAN connected to my PIYPNP Microsquirt Kit.

Does the ADC pins go low when active? So that I can use the PIYPNP's relays to run a 12v relay for things like W2A Pumps and Radiator fans. Or am I way off? (I know basic use for it, but am planning on EGT sensors down the track)

The board comes with the latest firmware so you don't need to upgrade. And I don't know why you'd see the board go offline unless you're trying to power it directly from the Microsquirt module (VRef). The Microsquirt has very little margin on its power supply so even the small current needed for the TinyIOx may be too much; that would mean the voltage regulator gets too hot and shuts down. Check if the ECU is also offline and if you still have 5V.

The ADC pins will not go low if you configure them as ADC inputs. If you want to activate something from the TinyIOx, you will need some sort of circuit. What exactly will depend on what you want to do. And I'm completely confused by what you're trying to do and how you want to connect things up. Can you elaborate because I have no idea what is in the DIYPNP.

Thank you for your prompt response, I'm sorry about my bad explanation.

The issue with power was resolved by taking the power from the microsquirt module and not from the 5v power supply on the DIYPNP board.

So how would I configure a AD pin to trigger an analogue action (eg, switch a 12v relay).

The onboard relay, take a neg trigger and outputs 12v to run a automotive relay. Designed for use with chip triggers.

Thank you for your patience,
Geoff
Top

There are a few different ways of configuring an output and that will depend on how you want to trigger it. So what should turn on and off the relay?

I found another post where someone had used the TinyIOx to switch a Fan relay, which is what I want to do. And from another post you mention that when triggered the output from the TinyIOx is 5v when on. Thus a simple transistor circuit will be able to switch the relay. But my issue is that no matter what I do with the configuration I cannot see a switching 5v output from PTE2 or PTE3.

Firstly, is everything I've mentioned above true, and if so how would I configure the settings to switch the PTE2/3 output pins?